A witch doctor is one who uses traditional means to cure illnesses and diseases. Most of the witch doctors in Nigeria claim to use traditional religion and the belief in local deities or gods to cure afflictions and ailments. Whether we believe it or not, most Nigerians still believe in the efficacy of the powers of witch doctors.

Yes, we go to churches and mosques. Yes, most Nigerians pretend to be very religious. We all pretend that anything concerning traditional religion and local deities is a sin, but the fact is that a lot of Nigerians go secretly to see these witch doctors for ‘solutions’ to their problems. Even some notable men of God (pastors) consult witch doctors from time to time. This is the word of a witch doctor I recently interviewed.

Strategies Mr. Saheed uses to make N15 million monthly as an Ifa priest or with doctor

Mr. Saheed (not real name) was born a Muslim, though his grandfather was an Ifa priest. Mr. Saheed has a Masters degree in history from a top UK university. He had earlier studied History in a university in Nigeria. He relocated to Nigeria from the United Kingdom after his studies there.

After years of searching for a white collar job, he decided to go and learn Ifa from a professor in Osun state. After 12 months of mastering Ifa incantation and rendition, he launched his witch doctor business. Please note that Mr. Saheed’s plan of learning Ifa is to start a business from it and make money. He saw the opportunities in this  ‘business’ and he decided to make a fortune out of it. He deployed the below strategies.

Saheed knows that poor Nigerians often believe they have a lot of problems and that the causes of the problems are supernatural, hence the solution must also be supernatural. Saheed cashed in on this belief.

The office was designed with traditional objects like local calabash, red clothes, cowries and all other objects that made the outlet looked very much like the home of an Ifa priest. Again, this strategy was used to make people believe that the place is truly an abode of spirits.

Saheed employed local men and women around the area he operates as scouts for customers. Some of his members of staff have the role of deceiving people about the efficacy of his powers. They will tell poor people around them that Saheed can solve any problems. Saheed pays them commission for any done deal.

This is one of Saheed’s biggest advantages. He knows how to perform Ifa incantations and renditions, much to the delight of anybody who is listening to him. With this skill, it is very easy for people to believe that he has great powers to solve any problems. His degree in history is also a big plus. He has a better customer service skill than the illiterate witch doctors. 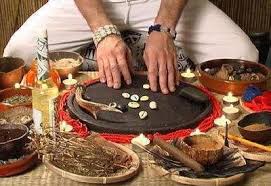 Saheed has a ‘talking spirit’ in his office used to make people believe that his magical powers are real. The spirit is called ‘Osanyin’ by the yorubas. Osanyin is meant to be a deity that talks and says a lot about your life without having any prior knowledge of you. Osanyin is meant to tell you the problems you have and solutions without knowing you at all.

However, criminal witch doctors now use a form of radio and speaker; they employ someone with a funny speech or tone to speak through the speaker. All you will see is a statue or image with voice coming out of it. Most people have fallen for this type of scam. Saheed deploys Osanyin (talking spirit) while consulting for his clients.

Saheed has accounts with facebook, Instagram, Youtube and Twitter. He shows his exploits and works on these social media platforms. Saheed is well educated so he knows the reason why he should market his services through the social media. Nigerians think they have a lot of problems caused by enemies, wicked family members and jealous neighbours. So to get this kind of clients or customers, the social media may prove to be a very good tool.

There are young people who consult Saheed before they go for job interviews. Most of these people got the contact of Saheed through one of his social media accounts. Young ladies also wanting to marry good men also ask for Saheed’s guidance.

Lying is part of the game. These witch doctors can lie that their powers made a certain politician to win elections. They can lie that they gave the politician a ring to wear on one of his fingers to curry people’s favour. Some claim that they can give you a ring that you will wear and no cutlass can penetrate your body.

Saheed has a database of the phone numbers and other details of his clients. He greets them at the beginning of every month and offer prayers. He stays in touch with all his past and current clients regularly.

He even offers money to those who need it sometime. At the end of the year, he gives his clients small gifts and souvenirs. This act of selected generosity is used to further his business. Human beings like people who are generous and Saheed knows this fact.

Saheed claims he makes N15 million monthly, though he claims his solutions are real and that all what he does are legitimate.

You should know that you can make a lot of money if you have skills in any traditional religion or how to worship any local deity. It can be a business venture that can make you millions of naira. However, you should know that deception can be illegal.